I’ve gotten a little behind on my blog recently, but I’m hoping I can make up for that this week – this post is about last weekend (June 27/28) and the trips I went on then.

On Saturday, one of our OTGC leaders, David (who also lives with me when he isn’t off making arrangements with next month’s hospitals) organized a half-day hike from Usa River up to the village of Nkoaranga, further up the slopes of Mt. Meru. In his words, “we’ll be walking about 12 kilometers (around 7.5 miles) and we’ll rise about 400 meters in altitude.” This seemed like a fun trip to get to know the area a little better, get some good views, and see some of the local villages and farms, so I agreed to go even though it meant another day of getting up at 6:30 am.

We started out by walking along the main road that runs from Arusha to Moshi, dodging the trucks and daladala that seemed way to close for comfort, but soon we turned up a more local road that took us past some rice paddies with farmers walking around spraying pesticide. 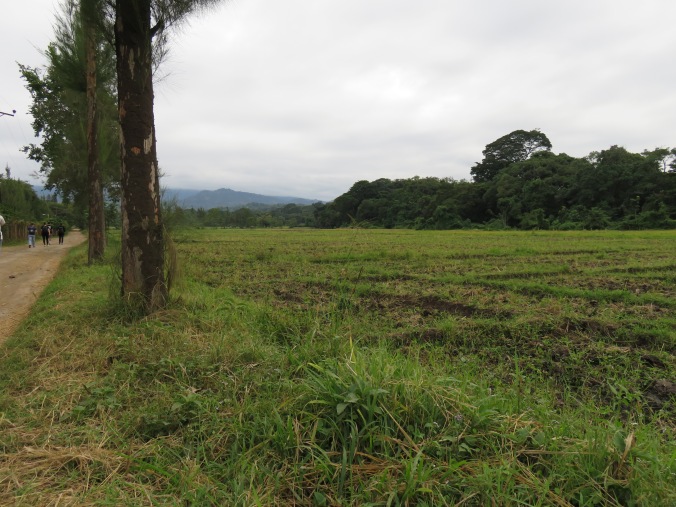 Rice paddies on the way up Mt Meru

Soon we started hitting some hills surrounded by fields of corn. Something I didn’t expect to see in Tanzania was the huge number of cornfields, which I think of as distinctly American. However, corn is a staple crop here, along with sunflowers, which also grew in spectacular sun-drenched expanses. At this point, we also started passing by some small villages with children playing outside. As soon as one spotted our very conspicuous group, there would be a shout of “mzungu!” which is the Swahili term for white foreigner. This would start a chain reaction of kids running up to join the growing group trailing us, also shouting mzungu, punctuated by a chorus of “hi!” and the occasional “good morning!”

All children in Tanzania will learn English in school, but for those that only make it to the primary school level, their knowledge will be relatively basic. Even on my daily walk to TCDC from my homestay in Usa River, I will always get kids shouting “hi!” although I don’t get “mzungu!” so much, seeing as the language school is so nearby.

After a lot of waving and the returning of greetings, we turned around and kept walking with a trail of kids behind us, making us look like some modern pied pipers. They did get tired of keeping up with our pace, so we eventually lost most of our followers.

After walking up the road for a long time, we reached Nkoaranga village and hospital, where one of our groups from EWH will be staying the second month. It was interesting to see the change in climate even on our moderate hike up the mountain; it was much greener and wetter up here than it was in the lowlands. The cultural differences I had seen the previous week between the seminomadic Maasai of the arid lowlands and the agricultural Chagga on the slopes of Kilimanjaro started to make more sense.

We had made it to our destination, but we wanted to see some views of the lowlands, so we continued past Nkoaranga up into the foothills, where the path had a sharp increase in steepness and an equally sharp decrease in navigability. As we struggled up the mountain, we were passed by locals of all ages on their way up and down, often carrying heavy loads of grain on their heads. The people here definitely got in their daily physical activity.

Group picture with the view; a couple local boys decided to join us

Passing by more farms and villages that became ever-greener, we often stopped to talk with the local farmers for a minute to greet them and ask them for some directions. Most of the real talking was handled by David our OTGC, who was much more conversational in Swahili than the rest of us. After continuing up and up, we finally got some great views of the lowlands. Cows and villages became more frequent, and we started accumulating more children again who gathered to watch us from the hills on the side of the road.

Walking through the farms in the foothills 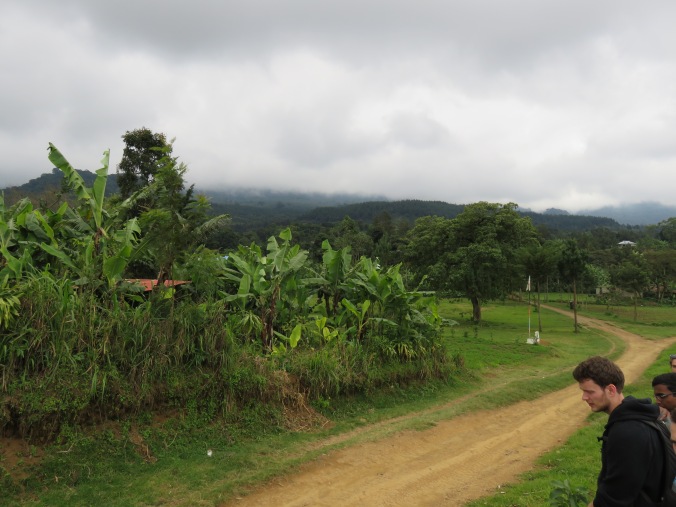 Spotted a cow through the banana trees

After deciding to turn around to make it back by lunch, the return trip started out fairly easy after walking uphill for so long. However, we had covered a lot more distance than David originally said, and some of us (including me) started to get more and more tired of walking. The return trip was much more of a blur, with my legs aching for a break and my stomach longing for some lunch. I perked up a little bit when I heard what sounded like a marching band coming my way, and a wedding convoy with a brass band on the back of a truck with the bride’s family behind it passed us by. Finally getting back to TCDC, I didn’t do much the rest of the day besides relax and eat some lunch – one of the girls on the hike had a pedometer with her, and we ended up covering somewhere around 20-25 kilometers in total (around 13-15 miles).

The wedding party looked surprised to see us too

On Sunday, I was looking forward to a much more relaxing day. The previous week, I had been talking with a local tour company to arrange a trip to a desert oasis called “Maji Moto” (hot water) that David recommended to me. We ended up having most of the group coming with us, around 23 people.

After a 2 hour drive through the arid lowlands and Maasai country, we arrived at the most cliché (but beautiful) desert oasis I could have imagined. Words don’t do it much justice, but the very blue, very clear water was surrounded by palm trees in the middle of arid scrubland with some dry-looking mountains in the distance.

We had arrived pretty early in the morning, so luckily we had the place to ourselves for the moment. The water wasn’t exactly hot like in the name, more lukewarm, but the setting was so beautiful it didn’t matter to us at all. After jumping in, we explored around a little bit – the area consisted of a couple of larger pools with a palm tree tunnel connecting the two. Getting to the other pool was somewhat of a challenge, since there was a pretty substantial current running through it, and the water was fairly deep.

Mostly though, we hung around in the main pool by the parking area. There were lots of little fish in the pool that nibbled on my feet and legs, which really freaked me out at first, but turned into only a minor annoyance. After exploring around a little, we started doing some flips and jumps on a rope swing tied to a tree, as well as trying to climb up onto some of the trees hanging over the pool with the monkeys overhead.

There was a small little stand and cooking area where some locals cooked us “Chipsi Mayai,” (French fries and eggs) which according to David is the Tanzanian national dish. After lunchtime, though, more and more tourists and locals started filtering in, and it soon became relatively crowded, which made me glad that we had come a little earlier. It was amazing to see some of the acrobatics the local kids did on the rope swing, hanging upside-down and doing flips as well as climbing amazingly high into the trees. They even swam, without goggles, into the underwater cave where the water was coming from and came out of another hole underwater, something I would have definitely drowned trying.

We did explore a little around the area, but being a desert oasis, the landscape was pretty desolate and hot, and we soon wanted to go back into the spring. We finally left around 3 pm, feeling a lot better after the previous day’s long hike, ending another great weekend of some Tanzanian tourism.

It was pretty desolate around the oasis